Detective Joe Connors is called to a murder scene. There, he finds that his former partner and best friend, Johnny Provan, has been gunned down by a fellow cop. The officer who shot him claimed that Provan had lost his mind and was pointing his gun at him. As he begins to lead the investigation, Connors has to confront some demons. His wife, Brenda, had cheated and left him for Provan.  After Brenda told Connors about the affair, she immediately was involved in a car crash which meant that neither man would have her. Both men struggled to cope with her death. As Connors investigates further, he finds out that the brownstone where his former partner died is a very special place. This house allows contact with loved ones who have passed on – a house with rules. Like a good detective, he follows the trail and gets in too deep. He finds out that breaking the house rules comes with consequences.

The novella is full of noir themes, from our hard-boiled detective protagonist narrator, unpopular with his fellow officers, to the heavy drinking, mysterious world, drenched in scotch and cigarettes.  Shadows play an important part in the story, as they do in noir features, and one of the greatest film noirs, The Maltese Falcon, is a key reference.  The residents living in the mysterious house seem to contribute to this noir theme too, as they all have their own secrets and reasons for being there, and are hesitant to share too much with Connors.  I really enjoyed these nods to that great period. 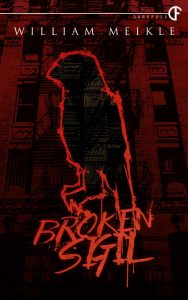 Even though this is a title you’ll probably get through in one sitting, Meikle somehow brings depth to even the minor characters in the book -much more than I’d expect, and more than most writers can bring to fruition so quickly. You get to know the interesting quirks of the residents, Mrs. Gaspar, Mr. Brown, and the house caretaker, Madam Girotte, and feel empathy for them and their individual losses. Kudos to the author for that. Madam Girotte was one of the most enjoyable characters in the book, knowledgeable about the house’s secrets and a guide for those who seek. The book has a strong and interesting story. The dread is mostly in the unseen, with little violence or gore. It’s all very subtle, and following a satisfying conclusion, very rewarding.