Broad Green Pictures is not in a good place right now; its genre outings are not proving popular with audiences who aren’t flocking to see its flicks. The latest release, Wish Upon, grossed a meagre $13.2 million on its $12 million budget and last year’s crowd-splitting Neon Demon grossed only £1.3 million worldwide. Alarm bells are now ringing. 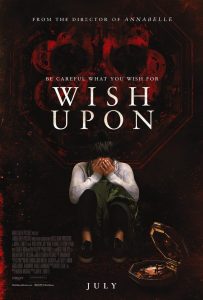 Broad Green’s CEO Gabriel Hammond has acknowledged the “abject failure” of Wish Upon and has admitted that it’s time for the company to re-examine what it’s doing. His full quote reads as follows:

“There is not a positive story that can be written about the company right now. It super saddens my brother [CCO Daniel Hammond) and I because we have worked really hard these past few years. But it is time to re-examine what we are doing, own up to the mistakes we have made and come up with a plan for moving forward. The rumours of our demise, which have been circulating for a year and a half, are greatly exaggerated. We will completely retool the production division. We need a new way to source films. My brother and I take full responsibility for the failure to put together a department that can deliver, and this is 100% on us for not bringing in the right people and giving them an opportunity to thrive. Unfortunately, that department cannot continue like this.”

It’s great that the company is not giving up entirely, but the Hammonds are not wrong when they say changes need to be made. Broad Green states that a full reboot of the company will occur by 2018, so keep your eyes peeled for more as it comes.