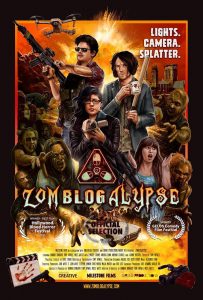 British horror-comedy Zomblogalypse is set to premiere later this month in its hometown of York, England, at the Dead Northern Film Festival! Following that screening on September 26, zombie fans will also be able to catch the film at the Dead of Night Festival in Merseyside, where it will close out the fest on October 3rd.

Written, directed, produced, and performed by ​​Hannah Bungard, Tony Hipwell, and Miles Watts, Zomblogalypse is the feature-length film adaptation of the popular web series of the same name. The film follows three inept survivors of a zombie apocalypse: Miles, who just wants some peace and quiet and a decent cup of tea; Tony, an over-enthusiastic human wrecking ball who likes blowing things up; and Hannah, who video blogs their adventures and knits in the bath to avoid the fact that she’s really a massive coward.