A Brief History Of The Movie Vampire

The horror genre is awash with legendary monsters and beasts which have not only managed to enter our nightmares and chill us to the very bone, but have themselves become iconic and – paradoxically – well-liked figures in popular culture.

Many of these memorable monsters, most of which have been pulled from literature, have come along way over the years constantly evolving on-screen; they have been richly explored by filmmakers and visual storytellers alike.

One such notable horror figure is of course the vampire – the immortal, sunlight dodging, blood sucker who has been represented in a variety of ways on the big screen, from loveable hero to soulless fiend. The movie vampire has come a long way… 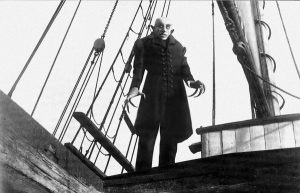 NOSFERATU (1922)
Director F.W. Murnau’s iconic and well celebrated vampire movie ‘Nosferatu’ arrived on our shores in the early 1920’s. This black and white silent German horror, based on the novel ‘Dracula’ by Bram Stoker, is genuinely disturbing and a visual masterpiece that paved the way for how both vampire movies – and even horror in general – has been handled and influenced since.

With an unforgettably visual and creepy performance from actor Max Shrek, the iconic Count is shown here to be a disturbing symbol that represents death in a very viscerally effective manner.

HORROR OF DRACULA (1958)
The late and legendary Christopher Lee donned his cape and fangs several times to portray the iconic ‘Dracula’. It was without a doubt his most famous role during his long-running acting career and he certainly made it his own. Far removed from Max Shrek’s performance, it was Lee who introduced a very British and refined performance to the screen giving the literary character a very genteel persona.

This 50’s classic was produced by the hugely successful Hammer horror company and helped reframe many of our expectations of Bram Stoker’s classic novel. It also gave real depth to many of the characters which hadn’t been seen previously on the big screen.

THE LOST BOYS (1987)
Almost three decades after Hammer began churning out ‘Dracula’ adaptations it was director Joel Schumacher and a fresh-faced line-up of popular teen stars who would find themselves involved in a cult classic vampire outing. ‘The Lost Boys’ was a pure product of the 80’s and like so many of its movie peers at the time it was filled with coolness, style, fantasy and escapism.

It’s fair to say the genre has more recently slipped drastically into romanticising the vampire with examples including movies such as ‘Twilight’ and even slot games such as Immortal Romance which depict the more desirable side of these sinister blood suckers. Even though ‘The Lost Boys’ touched on this element, it was a movie that regularly dived into aspects of classic vampire-related mythology, whilst ensuring that there were plenty of jumps and scares along the way.

But whilst it’s clear that perhaps many themes in the movie border on certain social concerns of the time, such as the fear of AIDS, it was a vampire movie that gave real credence to the sub-genre and tackled the questions of teen angst, peer pressure and that need to belong so perfectly.