A brand new, spooky and complex trailer has been revealed for Pascal Laugier’s upcoming feature Ghostland and it showcases supernatural frights and a complex storyline. It looks like a home invasion-meets-a-haunting, so it’s no surprise to learn that it’s from the director of Martyrs; a film that blended religious terror, body horror and a haunting. It also had a bit of home invasion and murder in it, too. 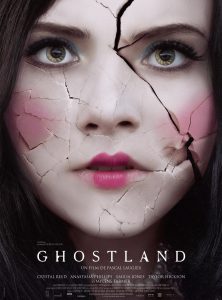 We’re huge fans of Pascal Laugier and, if you haven’t seen it, do check out the Tall Man if you enjoy twisty and chilling ghost stories. It’s also got a great performance from Jessica Biel. Enough about that, though.

Ghostland follows a woman who must defend her children from intruders on the first night they spend in their new home. Cut to sixteen years later and the girls revisit the house and strange occurrences make the past come back to haunt them.

Ghostland stars Crystal Reed, Taylor Hickson, Emilia Hones, Rob Archer and Anastasia Phillips and will be released in the USA in April 2018.