Brand New Quotes Poster and Clip from The Void 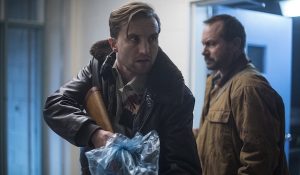 The Void is out now in UK cinemas, so we’re hoping a ton of you have already caught the film and enjoyed it as much as we did. What did you think? We loved it and you can read out full 4-star review right here.

To celebrate the film’s theatrical release, we’ve been sent an exclusive clip from the film that gives you 58-seconds of Void mayhem. Not only do you get to see the monstrosities that the characters have to deal with, you get a tease of the impressive practical effects that dominate the feature. 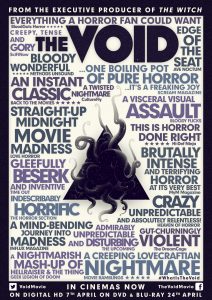 Synopsis:
Encountering a blood-soaked man on a dark deserted road, a police officer rushes the victim to the local hospital. Soon the staff and patients are trapped by a terrifying, otherworldly threat and forced on a hellish voyage into the depths of the building to escape the nightmare.

Also check out the brand new quotes poster for The Void, which shows you how much the film has been praised by the critic community. As we say, it’s one boiling pot of pure horror and it is not to be missed!