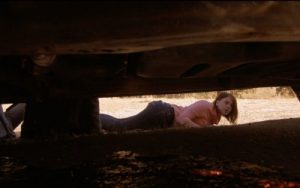 A group of students are stranded and hunted down in the middle of nowhere in Downrange, the latest from Japanese director Ryuhei Kitamura, who made 2000’s Versus and 2002’s Alive, before switching to mainly American productions with the likes of The Midnight Meat Train and No One Lives. Here we have the trailer for Kitamura’s latest, ahead of its world premiere at this year’s Toronto International Film Festival. 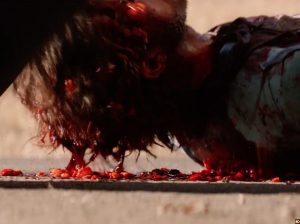 Synopsis:
“Six college students are carpooling cross-country when one of their tires blows out on a desolate stretch of country road. Getting out to fix the flat, they quickly discover that this was no accident. The tire was shot out. With their vehicle incapacitated, the group is pinned down and mercilessly attacked by an unseen assailant as they desperately attempt to find a way to escape.”

“While I’ve created single location films in the past, Downrange marks a new style of storytelling for me, wherein sustained, breathless terror in a singular location is what drives the entire plot,” Kitamura said recently. “We’ve crafted a film in which is fuelled by relentless dread, and are very excited to share it with horror and suspense fans around the world.”

Going by this blood-soaked trailer, we could be in for something really special.

Downrange is scheduled to be released in early 2018.