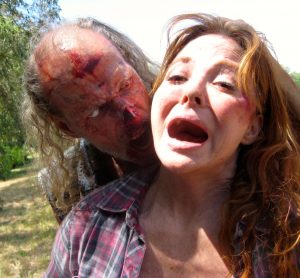 Like a plague is to humanity, the infected subgenre is an unwelcome epidemic in the horror community these days. The bombardment of zombie movies throughout the years has resulted in a staleness and much needed refreshment. Therefore, it takes something special to spark the interest of audiences who have witnessed the undead rise from their graves too many times, or a bewildering disease turn seemingly ordinary people into bloodthirsty maniacs. Kevin Van Stevenson’s first full-length feature, On the Brain, falls into the latter category, and it epitomises the dime-a-dozen uninspired and wholly generic fare many of us have come to expect from films of this nature. 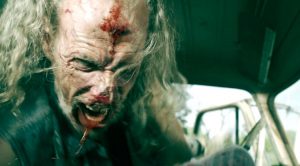 Set in the small desolate and drought-burdened town of Golden Torch, an unidentifiable disease is turning the men into murdering lunatics. With the disease spreading and the violence escalating, it’s up to the new sheriff Kelly (Danny Hansen) to put an end to the infected before it goes even further, even if it means risking his own life.

The plot is fairly threadbare, but it does present the film with opportunity to unleash some unhinged havoc, and there are moments where it comes close to accomplishing that. Unfortunately, the horrifying concepts are applied too mildly to leave much of an impression on seasoned horror aficionados. There are some twisted ideas at play in On the Brain, but the flaccid execution fails to accomplish any desired disturbing effect. It’s clear that writer Brandon Trask has some deviancy in his imagination, but not enough to write home about on this occasion. The infected are more laughable than menacing, and while the film is imbued with a welcome ghoulish sense of humour, the half-baked antagonists fail to rouse anything more than the occasional forced smirk. 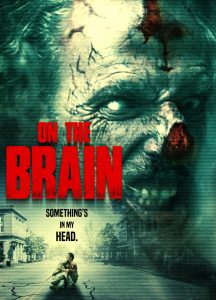 That said, On the Brain is a competently directed film, only mired by the budgetary constraints which are commonplace in micro-budget horror movies. While other filmmakers in a similar position have shown that invention and heart can elevate films with shoestring budgets to levels of greatness, Van Stevenson doesn’t do anything to stand out from the herd. That isn’t a knock on his talent by any means; there’s just nothing about On the Brain that’s going to leave an impression on audiences.
However, it does boast some impressive cinematography courtesy of Michael A. Perry, and the small town setting and desolate open plain backdrop is quite nice to look at if you’re a fan of isolation and scenery. The cast do a serviceable job as well, and there is some enjoyment to be had in knowing that they were all clearly having a good time making the movie.

If you’re a fan of movies about zombies and the infected on the rampage, then you might have some fun with On the Brain. It’s not going make you worry about any potential plagues in the near future, but it’s a passable time waster all the same. Overall, it’s just another run-of-the-mill zombie flick, and you’re probably more than aware of what those are like by now.