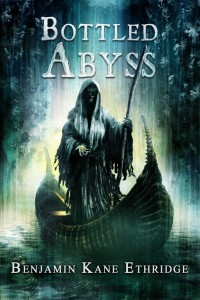 Bottled Abyss by Benjamin Kane Etheridge was originally released in 2012 by Redrum Horror. A new revised and authors preferred version of the Bram Stoker Award Nominated novel was released on the 3rd April 2015 by Horrific Tales Publishing based in the UK.

Herman and Janet Erikson have been through Hell and are still hanging over the Abyss by their fingertips. Unable to climb back out they suffer and survive with the monumental grief of losing their two year old daughter hit by a getaway car fleeing a robbery. Janet turns to the bottle, Herman withdraws and loses himself in work. Life takes another turn when their dog goes missing and Herman sets out into the coyote infested desert bordering the house. He finds his dog close to death and once more faces tragedy in a life that’s already seen too much. A stranger appears from nowhere and the decorative bottle from his pocket changes everything with a lifesaving elixir. The dog miraculously saved and vitality restored.

Further devastation comes when Janet nearly succeeds in finally drinking herself to death, Herman knows help isn’t too far away in that lifesaving liquid from the bottle. He must find the stranger and take the bottle, before it’s too late.

A fascinating blend of mythology and horror comes to the fore as the bottle brings both life and death in equal doses to the various people who come into contact with it.

The mythology comes from the Goddess Nyx and the River Hythia, along with the Ferryman and the Fury. The Ferryman or Charon ferried the souls of the dead across the river Styx to Hades, the land of the dead. The God Nyx was a shadowy figure of the night and the Fury a spirit of punishment that was used in the story to kill anyone who had the ancient coin, a result of a life saved by the bottle. The mythology aspect worked for the story but the only real figure of renown was the Ferryman, the rest I’d never heard of and didn’t really stand up to the scrutiny of an internet search.

There were a couple of lines that didn’t feel right such as ‘Janet was authentically happy’ and a sort of ‘pleasant cleft between her luminescent breasts’ but these were minimal and largely contained to the start of the story.

The majority of Bottled Abyss is very well written but it didn’t really grab my interest nor did I find myself desperate to get back to it. All told it was incredibly bleak and depressing, despite what the family went through and coping mechanisms aside. The chance of vengeance presents itself out of the blue and this in turn bought some tension and intrigue. It was short lived however as the mythological underworld took over and the darkness of the human soul. In conclusion the Bottled Abyss will certainly appeal to some but unfortunately not this reader.