The Summer I Died was one of the most horrific and powerful horror books I’ve read. It was a rare classic that really stuck with me. If you haven’t read it yet, you must! If you need further convincing here is my review: The Summer I Died. The story of our protagonist, Roger Huntington, continues with this second novel in the series. Having endured torture and tremendous loss, Roger has moved to the West Coast for a fresh start and to pursue his art. He’s haunted by the memories and trauma of the Skinny Man, the villain from the first book, but he’s doing his best to move on. His world comes crashing in when his (wished for) love interest, Victoria, and her fiance, Gabe, are kidnapped.

Roger, our hero, has to struggle with the urge to commit violence and kill the aggressors he meets, fuelled by his experiences with the Skinny Man and his feelings of power and righteous revenge. Despite his struggles, he does deliver plenty of violence out of necessity, rather than relish. You really feel for Roger, who must be the unluckiest man alive to be put in these situations, but also somehow the luckiest, since he’s at least alive. He faces test after gruelling test in his mission to rescue Victoria. You can’t help but root for Roger. He’s the everyman pushed to the limits – the kind of man you’d hope to be if you were put in such a desperate situation.

Born to Bleed goes in a different direction than the first book and feels less grounded in reality, but that doesn’t detract from the story. Of course, the second book in a series can’t just retread the ground covered in the first and expect to succeed. The gritty realism of the first book was a cornerstone to what made it so disturbing. Gone are the arduous pages of torture. That’s not to say this book is toned down much. The violence is significant, as you would expect, with plenty of gore and shocks. A co-worker happened to see my book open and read a particularly graphic scene, and now she thinks I’m a little unhinged. It’s a fair assessment. 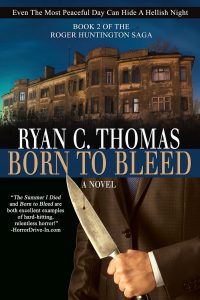 The Skinny Man was a really effective villain, and with this book Thomas has given us a new set of bad guys and a new mythology. What we have are excellent antagonists – a whole different class – that really take some overcoming. I won’t spoil anything about them so you’ll have to read it for yourself, but trust me, they are evil, and once again, their crimes are graphic and boundary pushing. The climax is satisfying and the unexpected twist offers opportunities for Roger to go in new directions. The character has certainly come a long way from when we were first introduced to him. It all sets us up for the third book in the series. If you’re a newcomer it’s not absolutely necessary to have read the first book, but I’d recommend it as you’ll miss out on a few things.