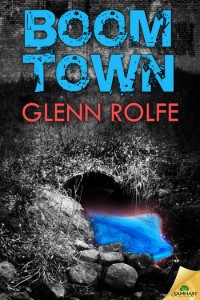 In 1979 Hollers Hill just on the outskirts of Eckert was the site of one of the most unique UFO eye witness accounts in history. A saucer like craft was observed hovering over the hill emitting a wondrous blue beam that caused the ground to shake, now 30 years later the tremors have returned and something even more dangerous. Blue Slime, with a mind of its own, complete with the power to turn you into a raving killer.

Boom Town is a horror novella by Glenn Rolfe which was released in April, 2015 from Samhain Publishing. Glenn Rolfe is a fairly new author, still cutting his teeth with just a handful of stories released of which this one was my first taste.

We follow a myriad of characters, some deeply under the influence of the alien stimulant and others just discovering the effects of the blue slime. Whatever you do, don’t touch the fucking stuff, is a lesson that soon becomes apparent.

On the whole this is not a badly written novella, there’s fleeting humour of the pissing yourself while bladdered variety, a bunch of kids bumbling round whilst everything around them disintegrates and some good wordplay interspersed with the odd thing that didn’t quite feel right.

‘Decorations fell like people from the titanic’ was a not so good example, along with ‘Fear swallowed her like a cyanide pill, poisonous and final’. Yet probably in equal measure some good stuff like ‘his headache pounded like a bass drum behind his eyes and took a turn down migraine lane’. Glenn Rolfe is an author to keep an eye on, it will be interesting to see if his promise delivers in the future.