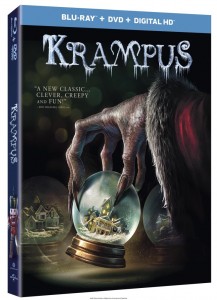 The Christmas creeper Krampus is gearing up for its home release this April and we can now reveal what spooky added extras that will feature on the DVD and Blu-ray. They are as follows:

BONUS FEATURES EXCLUSIVELY ON BLU-RAY:
* Krampus and His Minions – This feature goes behind the scenes of Krampus’ visual effects. It will delve in to the challenges faced by Peter Jackson’s Weta Workshop and take a special look at how Krampus and his evil minions were so wonderfully created and brought to life.
* Practical Danger – Featuring Stunt Co-ordinator Rodney Cook, this feature will look at how the film managed to execute its thrilling stunts.
* Inside the Snowglobe: Production Design – A look at how the art department managed to create a realistic set; filming was almost entirely on sound stages in the middle of summer in New Zealand!
* Behind the Scenes at Weta Workshop – Behind-the-scenes at the world famous Weta Workshop.
* Dougherty’s Vision – Director Michael Dougherty – along with the film’s cast and crew – reveals how his approach informed the tone, pacing, humour and performances of Krampus.

Synopsis:
When his dysfunctional family clashes over the holidays, young Max (Emjay Anthony) is disillusioned and turns his back on Christmas. Little does he know this lack of festive spirit has unleashed the wrath of Krampus: a demonic force of ancient evil intent on punishing non-believers. All hell breaks loose as beloved holiday icons take on a monstrous life of their own, laying siege to the fractured family’s home and forcing them to fight for each other if they hope to survive.

We’re particularly interested to see the alternate ending because, personally, we thought the theatrical finale was pretty perfect.

Krampus was a huge amount of festive fun and has definitely cemented Michael Dougherty as a horror film-maker to watch. He’s not waiting 8 years to bring us his next feature, thankfully, because Trick ‘R Treat 2 was recently announced. Considering the success of Krampus, hopefully we’ll be getting this one sooner rather than later.

Be sure to get your hands on Krampus on digital HD on 12th April or DVD/Blu-ray on 26th April.