Synopsis:
Four men set out in the Wild West to rescue a group of captives from cannibalistic cave dwellers. 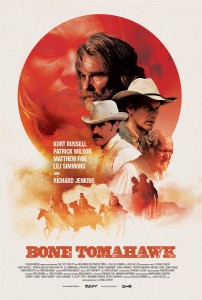 Genre mash up seems to be the latest fad what with ‘Pride & Prejudice and Zombies’ opening last week and this week’s mash up is the classic western mixed up with some exceptionally gory horror in ‘Bone Tomahawk’. –  albeit that this  script has been kicking around since 2007 and was on the Hollywood black list of top 10 unmade films for some time before finally getting the green light.

Set in the Wild West it opens with a pair of outlaws slitting throats of sleeping cowboys for their valuables only for them to escape through what appears to be some sort of burial ground where they meet some equally unpleasant types. Picking up 11 days later the film takes us the presumably ironically named town of Bright Hope which when we go there is swathed in cosy amber firelight where sheriff Kurt Russell, sporting what must be an early set of whiskers he must have been growing in preparation for Tarantino’s ‘The Hateful 8’, chats with his elderly deputy Richard Jenkins. It’s a scene that very much sets the tone for the rest of the film as over a cup of hot corn chowder they discuss a stranger seen coming to town. With the stranger arriving and ending up being shot the local nurse is called to remove the bullet whilst guarded Russells’ other younger deputy. The gentle ambling pace continues until the disappearance of the stranger, the nurse and the young deputy gives the story a kick as the sheriff comes to find that the trio have been abducted by,  what else, but troglodyte cannibalistic Indians. Russell has little choice but to go after them and with the help, though in all likelihood probably more of a hindrance, of his elderly deputy, the nurse’s husband (Patrick Wilson) who has a broken leg and a trigger happy local cowboy (Matthew Fox – who surely must be due a breakout movie role by now). 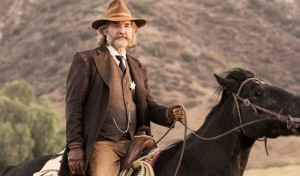 What comes after this as they trek down their prey becomes a trek too because this is so leisurely paced as to put many off which is a shame as much of this is character driven with Jenkins in good form as the talkative widowed deputy, Fox showing that he surely must be due  a breakout movie role by now  as a shoot first, ask questions later cowboy  and Wilson as the husband trying to do the right thing but clearly in no fit state to do so.

This is one of those films where you can’t help but wonder who’s going to get bumped off first by writer / director  S.Craig Zahler who handles the unexpected well with a narrative not always following the expected path.  For horror fans when the horror does finally arrive it is particularly brutal especially in one scene which is about as graphic as those in Eli Roth’s recent cannibal film, ‘The Green Inferno’. 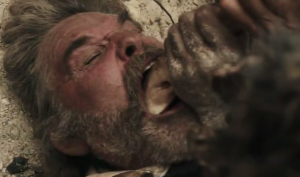 Many will be put off by the somewhat ponderous pace and in fairness at 132 minutes it would benefit from a tightening of pace but if you can stick with it this is for once a decent genre mash up.