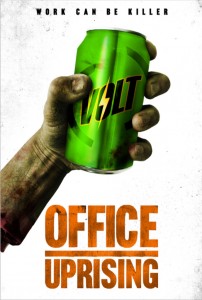 The first artwork has arrived for zombie/action/horror/comedy Office Uprising, ahead of its trip to the European Film Market in Berlin. The film is directed by Steven C. Miller (The Aggression Scale, Silent Night), from a script by Ian Shorr (Splinter, Rigged) and Peter Gamble. On production duties are Guilia Prenna (The Evil Gene) and William Clevinger (Under The Bed).

The synopsis reads like this:
“Office Uprising” is set inside one of the world’s leading arms manufacturers where a substance is slipped into the employees’ drinks by the board of directors that supposedly makes them work more efficiently. Due to a slacker within the company, though, they are fed the wrong formula and start turning into homicidal maniacs — leaving the slacker needing to step up his game to rescue himself and his friends from the growing zombie plague inside the company compound.

More info on Office Uprising as we get it.