Arkansas’ Boggy Creek, or Fouke monster is a local legend that has lent its name to a number of horror flicks inspired by its tale. Charles B. Pierce’s 1972 documentary-style The Legend of Boggy Creek became something of a drive-in hit, and was followed by 1977’s Return to Boggy Creek and Boggy Creek II: And The Legend Continues in 1984. More Boggy Creek films have come since, but the upcoming crowdfunded documentary Boggy Creek Monster is the first to cover the much-sighted beast with any seriousness.

Read on for all the details from the press release, and watch the first teaser below. 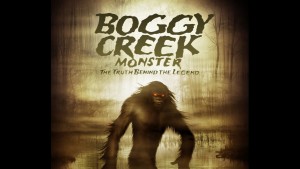 “A feature-length documentary chronicling the bizarre and often disturbing tales of a swamp monster said to lurk in Southern Arkansas is making its way to screens. The film is titled Boggy Creek Monster and is the third in a series called Small Town Monsters. Created by an award-winning production company from Ohio, Boggy Creek was shot this past April in Arkansas and was fully funded through a wildly successful crowdfunding campaign.

The film centers around the true stories that inspired the famed Charles B. Pierce-directed 1972 horror film The Legend of Boggy Creek. While the setting and stories have been revisited in multiple, campy horror films and occasionally featured on television shows such as “Finding Bigfoot,” the reality behind the Fouke Monster sightings has never been documented. All that will change when Small Town Monsters releases Boggy Creek Monster.

Now, the company has debuted the first teaser for the upcoming film. A moody little piece of marketing driven by nostalgia and a tinge of banjo that brings to mind the Southern setting, the teaser announces the film’s arrival in style. Boggy Creek Monster will have a special sneak preview at a festival in Minerva, Ohio, called Monster Day and will likely see a premiere in Arkansas prior to the official release. A release date is yet to be determined.

Artist Sam Shearon has created an incredible poster capturing the foreboding ambience of the film, which is directed by Seth Breedlove and produced by Brandon Dalo and Seth Breedlove. Author Lyle Blackburn, known for his book The Beast of Boggy Creek, is set to appear in the film and acts as a co-producer and consultant. The Small Town Monsters Company expanded its crew for this project to include cinematographer Zac Palmisano along with Jason Utes and Aaron Gascon in production roles.