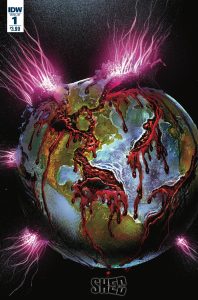 From the maniacs that brought you such toe curling comic horror as 30 Days of Night, Silent Hill, and a bunch of X-Files comics, comes the latest addition to the IDW horror lineup, Shed! A ghoulish tale of post-apocalyptic terror, the comic highlights the possibility of a new evolution of humans that shed their skin and the terrible outcome of those left behind. The work also marks the beginning of a new comic creator team, Obie Scott Wade and Ken Spevergav, as well as featuring the undeniably gruesome artwork of Steve Beach.

The official synopsis announces the comic:
Not since the Neanderthal have humans been forced to share Earth with a Homo-genus-cousin, and we slaughtered them into extinction.  This time they may be our only savior.  As Earth sheds her filthy Homo sapiens, she breeds the Sarx, a skinless hominid who worship a science-based God they call Connectome.

SCREAM’s Svetlana Fedotov recently sat down with writer Obie Scott Wade to pick his brain on all things gruesome:

SCREAM: Tell us about your newest work Shed. What can we expect from the comic?

Obie Scott Wade: Raw meat, race wars, and torture. But at the heart of the story is an average everyday family trying to survive a new form of toxic discrimination that infects their world. Every sixty thousand years, the Human Family Tree sprouts a twisted new branch that humans always find a way to kill off; like the Neanderthal and the Denisovans. But this time it’s different. A new, skinless breed of hominid is born called the Sarx and they may be humanity’s only hope against mass extinction, if we don’t wipe them out first.

With their exposed nervous systems, some of the Sarx are able to touch and manipulate the quantum field, which they worship as a science-based God they call Connectome, challenging established belief systems and shattering social hierarchy in an epic tale that spans two generations. Beginning with the story of Number One, a noted tattoo artist who sheds his elaborately-inked skin and becomes the progenitor of this new species, many of whom go on to view human extinction as divine prophecy.  You know? Comedy. Ha! Just kidding. It really is hardcore drama, but we hope our readers will identify with the intelligence and wit that come from a cast of compelling characters that we spent three years “fleshing” out.

SCREAM: What’s the story behind such an insane concept?

OSW: A fever dream. A few years back, I was developing a new concept with Stan Lee, when I got the Swine Flu and my temperature got so dangerously high I had a hallucinatory vision of the Sarx. It was pretty hellish. The flu and the vision. I told my creative partner, Ken about the experience and he began weaving an intricate and brutally realistic story about their introduction into society and the frightening challenges they would face as a new minority species. We spent the good part of a year asking ourselves questions about the social implications of this type of bio cultural relationship, before we even began writing their story. And it was so rich and layered we simply couldn’t stop. I’d say we’re obsessed.

SCREAM: You primarily did animation before getting into comics. Why start off with such an intense, adult oriented work?

OSW: After twenty years of making cute and cuddly comedic cartoons, like SheZow! and Lala Loopsy, my dark side got all squished up against the backside of my forehead, until it exploded onto my laptop. And it feels really good to let it out. While I am still actively working on several kid’s animation projects, SHED provides a nice balance to my overall creative spectrum. Besides, I simply could not resist tackling such a “meaty” story. Pun intended. That’s my cartoon side talking out the other side of my head. I’m a bit nuts. Not only did I write for Looney Tunes, I am one.

SCREAM: The art is incredibly visceral and detailed. How did you get such a talented artist like Steve Beach to work with you?

OSW: Going into this, Ken and I knew absolutely nothing about creating a comic book series and we’ve relied solely on the patient guidance of our editor at IDW, David Hedgecock. As David got to know our story, he paired us up with Steve whom I consider a new true friend, and a genius creator. A connoisseur of horror, sci-fi, and a broad range of literature, Steve is so perfect for the project, we simply cannot imagine doing it without him. We lucked out in getting him. He loves the material, has a specific vision for the world of SHED and has helped make it even that much more twisted and bizarre. Working with Steve is a match made in some alternate dimension’s version of heaven that’s populated with skinless angels.

SCREAM: Is this the beginning of a beautiful relationship with horror comics or at least comics in general?

OSW: YES, indeed! Abso-freaking-lutely! And we can’t wait! Ken and I are so hooked and addicted to the medium that we have already begun developing our next IP, with Cristine Chambers of Boardwalk Empire, and The Sopranos.  Rooted in historical fiction, it’s a gangster-genre piece with a twist that’s not been seen before. The script is done and we will begin the design process in June, right after the debut of SHED. And, yes, the gangsters in this new story do have skin.