“This is not a safe space,” promises the poster for A24’s Bodies Bodies Bodies, which features the cast lit by glow sticks, ready for a killer party. 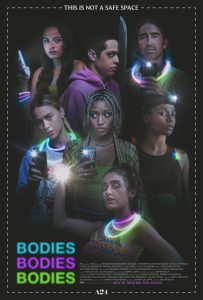 In the slasher film, releasing on August 5th: “When a group of rich 20-somethings plan a hurricane party at a remote family mansion, a party game turns deadly in this fresh and funny look at backstabbing, fake friends, and one party gone very, very wrong.”