On October 19th, Blumhouse/Universal’s hotly-anticipated reboot of John Carpenter’s Halloween will hit theatres, timed to coincide with the original’s 40th Anniversary. It’s being billed as a battle royale between Laurie Strode (Jamie Lee Curtis) and Michael Myers (Nick Castle) 4 decades in the making and heavily implied this will be the last Halloween movie ever. Of course, “ever” doesn’t always mean “forever”, especially in Hollywood.

Halloween director and co-scribe David Gordon-Green has already stated that he and frequent co-collaborator Danny McBride originally envisioned Halloween 2018 as 2 movies. More recently, they’ve both expressed a desire to make another Halloween film, should this one resonate with old and new horror fans. When a Twitter user asked Blumhouse directly about plans for more Halloween movies, the maverick studio replied that nothing was in the works before deleting the response all together. Luckily, CBR got a screenshot! 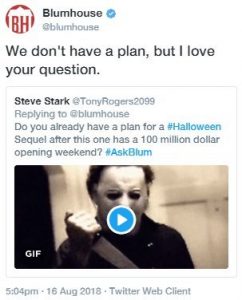 Of course, anyone with a bit of intuition can gleam meaning form this Tweet-and-delete manoeuvre. Now that Blumhouse and Universal have their claws in the property, they’ll likely milk it for all it’s worth. That’s just the nature of the beast. It all undoubtedly depends on how Halloween 2018 does at the box office. Blumhouse may want to maintain the illusion that this is the last Halloween film ever (because that will get butts in seats), but another one will probably get the green light the second it recoups its budget. The more Halloween 2018 grosses, the more likely it is we’ll definitely get a sequel.
You can check out the trailer and synopsis for Halloween 2018 below.