Bob Clark’s Black Christmas has been a staple of holiday horror since its release in 1974. But a remake is underway over at Blumhouse—and it’ll even arrive in theaters in time for Christmas. 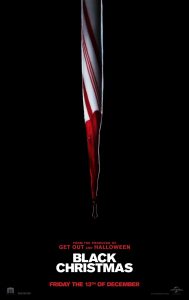 Green Room’s Imogen Poots is set to star, with Aleyse Shannon, Brittany O’Grady, Lily Donoghue, and Caleb Eberhardt rounding out the cast. The plot revolves around an unknown stalker killing off sorority girls one by one—but this generation’s young women aren’t going to go down without a fight. The film is being directed by Sophia Takal (Into the Dark) and the script was written by April Wolfe.

Black Christmas was already remade back in 2006, but that film has mostly faded into obscurity. Well, they say second time’s the charm. Will this be a Christmas miracle or a lump of coal in our stockings?

Blumhouse’s Black Christmas is set for a December 13th release. Take a look at the poster (right) —and check your attic for crazed killers, just in case.