Could Blumhouse Take on Friday the 13th? 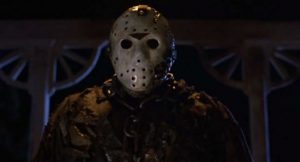 There was a lot of disappointment over Paramount’s decision not to go ahead with their new Friday the 13th film which, after various conflicting rumours about the approach it would take (would it be found footage? Set in the ‘80s? An origin story?), was indefinitely shelved by the studio early last year.

It would take a reckless fool however to bet against ever seeing Jason Voorhees killing on screen again, especially as the rights to the character are due to go back to Warner Bros./New Line Cinema this year. This week though, someone else mentioned the idea of taking audiences back to Crystal Lake.

Not content with bringing one horror legend back to the screen in David Gordon Green’s upcoming Halloween, Blumhouse head honcho Jason Blum may be eying a chance to take on Jason too. Talking to CinePOP, Blum was asked about any other projects he would like to tackle, and said:
“Besides Halloween? You know, I really wanted to do Friday the 13th. I would love to do that movie. Maybe someday we’ll get do to that one.”

He’s such a tease. Still, I can certainly think of worse companies to rescue the franchise. We almost saw another one from Platinum Dunes, for instance.