Blumhouse is to combine the Western and Horror genres with Wicked West, an anthology TV Series that will be based on “true stories”. You can read the planned synopsis below:
Wicked West utilises Blumhouse’s chilling cinematic style on this weekly series, telling stories of sadistic serial killers, murderous black widows, bloodthirsty family clans, and local legends laced with the supernatural. With a tense horror, modern cinematic style, Wicked West brings a haunting approach to the untold stories of the bloodbath known as the American West.

Blumhouse is steadily increasing its TV productions, with it also recently being announced that the reality series Scare Tactics will soon be revived by Jason Blum and the Blumhouse Television team. When speaking about the reinvention, producer Scott Hallock said:

“Scare Tactics pranks have always been imagined as a collection of miniature horror movies. But with Blumhouse on board, this show is about to get bigger, stronger, crazier, funnier, and scarier than ever.” 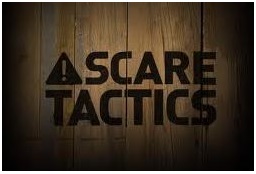 The show originally aired on Syfy between 2003 and 2013 and followed unsuspecting victims who stumbled into “scenes” from classic horror films. It was very funny as an audience member, but we’re guessing it was less hilarious for those involved…

What a cover! Freddy, #Pennywise, #Xenomorph and #

What is the best horror movie on this cover? #hor

Just had our UK newsstand sales for SCREAM MAGAZIN