While its ranking within the larger franchise may be tenuous, there’s no denying that Jurassic World: Fallen Kingdom packed a punch. Director J.A. Bayona may have been working with a somewhat lackluster script featuring admittedly 2-dimensional characters, but he fully utilized every horror troupe at his disposal, even infusing the family-friendly thriller with some serious emotional trauma. It’s not The Exorcist, but it sure punches Kong: Skull Island in the balls!

If you missed Jurassic World: Fallen Kingdom when stomped through theaters last June, you’ll be able to see the dino-mayhem when it arrives in a plethora of formats on September 18th; 4K Ultra HD, 3D Blu-ray, Blu-ray, DVD and On Demand options will all be available. Check out the trailer and synopsis below, followed by a list of special features fans and collectors can look forward to this fall.

Synopsis:
Three years after the destruction of the Jurassic World theme park, Owen Grady and Claire Dearing return to the island of Isla Nublar to save the remaining dinosaurs from a volcano that’s about to erupt. They soon encounter terrifying new breeds of gigantic dinosaurs, while uncovering a conspiracy that threatens the entire planet. 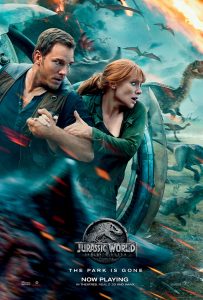 BONUS FEATURES EXCLUSIVE TO 4K ULTRA HD, BLU-RAY & DIGITAL:
The KINGDOM Evolves – Filmmakers discuss how the second chapter in the Jurassic World trilogy pushes the franchise in a new direction.
Return to Hawaii – Cast and crew discuss shooting the film in Hawaii.
Island Action – A behind-the-scenes look at the bunker scene and runaway gyrosphere sequence.
Aboard the Arcadia – Cast and crew discuss working with the animatronic dinosaurs.
Start the Bidding! – A behind-the-scenes look at the auction scene.

BONUS FEATURES ON DVD, 4K ULTRA HD, BLU-RAY & DIGITAL:
On-Set with Chris & Bryce – Go behind the scenes with Chris Pratt and Bryce Dallas Howard.
Birth of the Indoraptor – An inside look at the genetically designed monstrosity known as the Indoraptor.
Death by Dino – Go behind the scenes as the Indoraptor faces off with a key character.
Monster in a Mansion – Director J.A. Bayona discusses how Jurassic Park and Dracula (1979) influenced his approach to directing the monster in a mansion scene.
Rooftop Showdown – A look at the terrifying showdown on the rooftop of the Lockwood Mansion.
Malcolm’s Return – Behind the scenes with the one & only Jeff Goldblum.
VFX Evolved – The team at ILM discuss their cutting-edge approach to creating dinosaurs.
FALLEN KINGDOM: The Conversation – Filmmakers and cast sit down for a candid and casual conversation about Jurassic World: Fallen Kingdom.
A Song for the KINGDOM – Justice Smith sings for the cast and crew of Jurassic World: Fallen Kingdom.
Chris Pratt’s Jurassic Journals
JURASSIC Then and Now – Presented by Barbasol – Key moments from the Jurassic saga that tie into Jurassic World: Fallen Kingdom.