Recently we brought you news that the Wolf Creek TV series will air in the US on October 14th. It’s now been announced that the series is heading to the UK, who will actually get to see it a month-and-a-half earlier, with home video formats not far behind.

The 6-episode miniseries will premiere on FOX TV on August 30th, with Eureka Entertainment releasing each episode digitally on demand (via iTunes, Amazon, PS and Xbox) 24 hours after it airs.

Here is the synopsis as told by the press release:
Wolf Creek follows American teenager Eve Thorogood on holiday with her family in Northern Australia. Sadistic killer Mick targets the family, viciously slaughtering them for his own twisted pleasure. Seriously injured, Eve survives the massacre of her parents and little brother, and sets out to bring the killer to justice. And so begins a chilling game of cat and mouse, with the roles reversed and the hunter becoming the hunted. 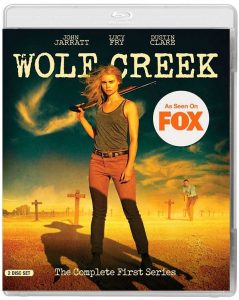 Following its airing and on demand release, the series will be available on DVD and Blu-ray from 6th October, from Eureka.