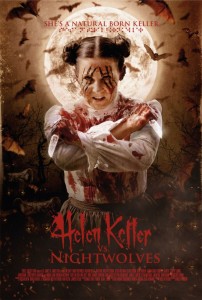 We didn’t think we would ever see the infamous Helen Keller battle grisly wolves, but the reality is real, and it’s going to be a side-splitting adventure in Helen Keller vs. Nightwolves.

Written by Ross Patterson (FDR: American Badass), Helen Keller vs. Nightwolves stars Jessie Wiseman as Keller, a deafblind woman who decides to become a 1900s badass and slay beasts of the night. Also starring Lin Shaye, known for her role in Insidious, as an older version of Keller.

The official red band trailer shows that this is a film that certainly doesn’t take itself too seriously.

Synopsis:
As a small village is constantly tortured by a group of vindictive nightwolves, robbing villagers of their hearing and sight, only one woman can fight back. That woman is blind and deaf Helen Keller, who makes it her mission to make them howl.