The Korean masterpiece The Wailing is a brutal, unforgettable and epic journey from director Hong-jin Na (The Yellow Sea, The Chaser) and is definitely his best film. There aren’t enough adjectives in the world to describe how much we loved it, but you can check out our 5-star review of the film right here.

To celebrate the film’s release in the UK and the end of its festival run, we have a bloody beautiful poster to share with you. The poster embodies the core element of evil that haunts the film’s core, as well as the young girl at its heart. We love it. 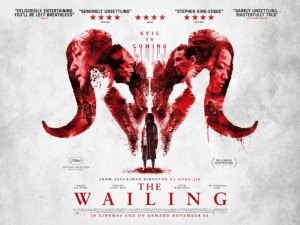 A stranger arrives in a little village and soon after a mysterious sickness starts spreading. A policeman is drawn into the incident and is forced to solve the mystery in order to save his daughter.

Check out the epic and quite frightening trailer below, which showcases the film’s bubbling terror as well as its striking cinematography. We really can’t sing this film’s praises enough, so we hope you manage to get your hands on The Wailing; it’s available to watch on iTunes right now!