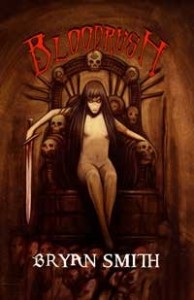 Now Vampire stories fall in two tidy little boxes in my world, you have the ones to be avoided at all cost, the ones that focus on the lovey dovey smutley side of things in Twilightesque fashion.

And the ones where vampires are violent animals, killers with no remorse that can jump in trampolining stylie to the top of buildings with 30 days of night on the mind.

Well I have to say Bryan Smith has veered toward Twilight and its taken him well under 30 days to get there, unfortunately. There’s the usual Smith sex and violence with an undertone of compelling power from female quarter but yeah there’s too much WTF going on.

“You can come with me to my secret place.”
“You mean… your home?”
“Yes. We can go there now, be there in a matter of moments, if you accept my offer. I’ll show you pleasures beyond anything you ever dreamed possible. You’ll have power. You’ll live forever.” A hint of a smile. “In a manner of speaking.”

Beam me up Scotty, no sorry you can’t have vampires traveling by teleportation, it’s just not fucking right, to magically appear and disappear at will, no I’m not having it.

And this switching into Hoover suction mode to drain every last drop of blood out of your victim, repeatedly. Sounds more like a kitchen appliance kicking in to me.

Shoot me now and put me out of my misery.

So Fuck the review I’m gonna give you a vampire joke instead:

3 vampires are having a competition to prove who’s the most vicious vampire amongst them.

The strongest one started first.

“Watch this,” He said as he flies so fast, about 100 miles an hour. After only 10 minutes, he comes back with blood all over his mouth. “what happened?” they asked. “did you see that house over there?” “yes?” “well.. I killed the entire family and sucked the blood dry!” “wow!? fascinating, as expected from the strongest vampire”

Then the eldest one takes the next turn.

“Watch and learn,” he said as he flies even faster, about 120 miles an hour. After only 5 minutes, he comes back with blood all over his mouth and his neck. “what happened??” they asked. “did you see that village over there?” “ye…yes?” “well… I killed every last person in that village and sucked the blood dry!” “wow!? magnificent! truly amazing, we can expect no less from the eldest one!”

Finally the last turn belongs to the fastest one.

“Don’t blink or you’ll miss it” he said as he flies really fast, even faster than the other two, about 140 miles an hour. After only a mere 30 seconds, he comes back with blood all over his mouth, his neck, and a broken nose. “wh..what happened???” they asked. “did you see that big fucking tree over there?” “ye..yes?!” “well.. I didn’t”