Blood-Stained New Poster for The Punisher

After the cancellations of Marvel’s Luke Cage, Iron Fist and Daredevil, I can only imagine that the clock is ticking for the Jon Bernthal-starring series The Punisher. However, that isn’t going to stop me from getting excited about the series’ upcoming second season.

A brand new poster has been revealed and it shows a blood-stained Frank Castle is armed as always. If thze look of his iconic skull is anything to go by, it looks like he’s already punished a person (or 5). 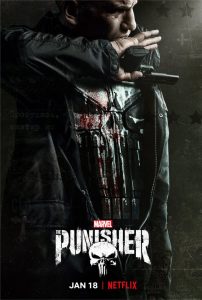 Thanks to a brilliant performance from Bernthal in the title role, the first season was hard-hitting, emotional and intensely exciting. We’re looking forward to seeing more from the killing machine intent on righting the wrongs in society in deadly fashion.