Rachel wakes up from a heavy night out to find the world has changed, her step-mother is dead in her bed with a glowing red mark on her, and the town is in chaos. The book starts as most apocalyptic novels do, but then offers something different almost immediately. I enjoyed the beginning in which we’re discovering the world with her and dealing with the unknown. The streets are full of smoke and destruction and all the bodies she discovers have a glowing red mark on them.

Our antagonist, Rachel, is desperately searching for her missing father, hoping he has not met the same fate as the rest of the town. Rachel’s friend, Jenny, joins her on her journey. Unfortunately, the Jenny character is pretty annoying, falling apart at the slightest thing, and there’s just so much screaming. Rachel is resilient and has a mature head on her shoulders for being 19. She’s thrown in to something of a leadership role amongst the survivors who gravitate toward the hospital. It’s a little hard to believe that a 19 year old would be a leader in any group, let alone a group of apocalypse survivors. The other major characters make for a diverse band of survivors, from the rugged cop Joel to the untrustworthy Scott. You feel the panic and confusion as they all try to understand the mystery of what has happened.

The interesting beginning drags on a little too long as we wait for the story to develop further. There is a significant amount of tension that builds up as bodies start to twitch, but at that point, it’s not clear what will happen next. We’re kept in suspense along with the characters. It’s not really until the second half of the book that we face a present danger. When the pace picks up, it’s really rewarding, and worth the slow burn build up.

This is not an apocalyptic zombie book (hooray!), which is really refreshing. There is not too much gore for the first two thirds of the book. It’s mostly horrific burns caused by getting too close to the glowing red mark of deceased love ones. This all changes when the dead come back fully, and the gore is turned up to 11. There are some vile and disgusting monsters and viscera that will please even the most die-hard gorehound. The way the bodies of the dead move is extremely creepy, even in the early stages. It makes me think of a cross between a certain scene from The Exorcist and creatures from the game Dead Space. And that is a wonderful thing. 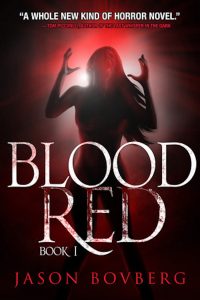 As I said, there is a lot of focus on the tension rather than action initially. But you must stick with it and you’ll be more than satisfied. What makes a book like this is the monsters, and Bovberg has nailed it. He’s given us something new and disturbing, and the images will stick in your head after you’ve finished reading. These are genuinely scary and repulsive – so different from the tired zombie tropes – and they are to be applauded. This is the first book in a trilogy. The second book, Draw Blood, is also available now. You’re very much starting the story with this book. There are many questions left unanswered. I expect great things from the second book as we’re fully into the action by the end of this book.