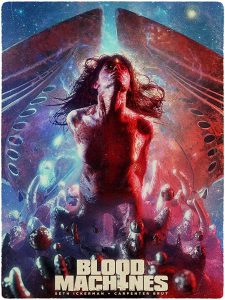 Synopsis:
Pursued by a warship, a machine with a defective A.I. system crash lands on the planet Apus 7. Helped by the women of the planet, who understand its plight, an entity (Joëlle Berckmans) emerges from the machine in the form of a woman and flies into space. But the commander (Anders Heinrichsen) of the warship is hot on its heels.

The first thing to understand going into Blood Machines is that it is not a film. Nor is it a series, though it is presented in three distinct chapters. If anything, the thing Blood Machines closest resembles is an extended music video, which makes sense, since it was directed and co-written by the pseudonymous Seth Ickerman (Raphaël Hernandez and Savitri Joly-Gonfard), who made a name for themselves after directing synthwave artist Carpenter Brut’s “Turbo Killer” music video (some imagery from which finds its way into Blood Machines, though in an elevated form).

While Brut also scores Blood Machines—and phenomenally so—Ickerman manages to achieve a symbiotic balance between music and visuals, ensuring neither overwhelms the other. And that’s important, because Blood Machines hinges on its audience’s ability to become fully immersed in the sensory experience it offers.

What little plot there is serves only as a vehicle for the orgiastic ballet between flesh and machines that is about to unfold. In fact, Blood Machines is at its best when no one is speaking. The dialogue borders on silly from time to time, and the acting can be shaky. But few words are needed, and the directors make the wise decision to largely let the audience decipher what’s on screen, rather than asking us to follow a convoluted sci-fi saga. A cursory text screen at the opening of the first chapter gives us a moment to strap in, and then we’re taken on a neon-drenched ride moving at hyperspeed.

A feast of colour and sound, Blood Machines is the kind of media you’ll watch alone and immediately want to watch again with friends, just to see their reactions. And with the three-part series clocking in at just under an hour in total, it’s a breezy, beautiful watch that should leave most viewers satisfied, even those who prefer more traditional storytelling.