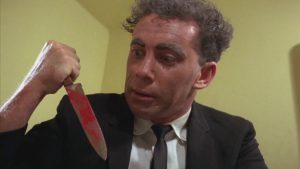 Synopsis:
Fuad Ramses, an eccentric local caterer, begins to stalk and kill several young women to resurrect the ‘Egyptian’ goddess Ishtar. The police are continuously baffled by the string of murders, and wonder why certain body parts are missing from each victim they come across. Meanwhile, a local woman hires Ramses to cater her young daughters birthday party, after he promises her an authentic ‘Egyptian feast.’ 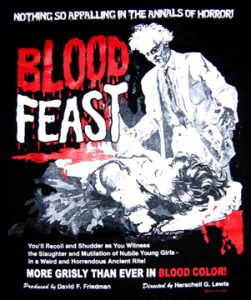 In September of 2016, acclaimed director Herschel Gordon Lewis passed away at the age of 90. He left behind an impressive body of work, which included some of the most recognisable titles in horror and exploitation. Lewis was often referred to as the godfather of gore, which wasn’t just a nickname, but a well-deserved title. It’s also one that he wore with proud distinction. He was filmmaker, a maverick, and a pioneer, one who always pushed the limitations of the genre, and in doing so, created new ones.

It’s his 1963 film, Blood Feast, which undoubtedly remains his most definitive work. Much like Lewis himself, it’s unrelenting, self aware, and makes no pretense about what it is–a visually striking expose of blood that contains all the camp of a carnival sideshow. The shadow of influence it cast still looms to this very day, even four decades since its release. Take a look at anything involving a knife wielding killer on the loose; you can trace its influence back here. 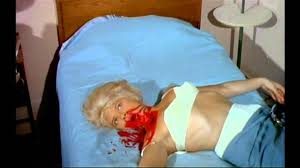 By today’s standards, this product seems primitive, laughable, and has the appearance of being nothing more than a low budget schlock fest. Although those observations are correct to some extent, they’re also the same reasons for its longevity, and why the charm has managed to endure for so very long. In an age of drive in films that featured space invaders and giant insects, Blood Feast unleashed a brand new type of horror upon the unsuspecting public—the slasher film. All of these years later, and the ripple effects are still spreading. Despite it’s paper-thin plot and cornball acting it still manages to deliver a product that never ceases to entertain, and at times repulse. Somehow, everything works together and coexists in this bizarre habitat of extreme violence. 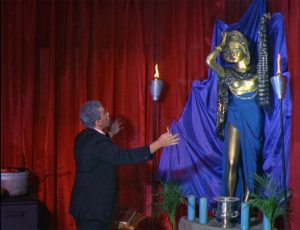 Aside from the excessive blood and young co-eds being cut to pieces, the most memorable star that shines is actor Mal Arnold as caterer/ machete wielding killer Fuad Ramses. To say his performance is over the top is quite the understatement. With his outlandish delivery and comical appearance, he completely hams up a role that anyone else might have attempted to take completely seriously.

Very few classics can lay claim to being a pioneering work, and even fewer can maintain their legacy over the years. Blood Feast continues to gain a loyal following, and remains in a class all by itself. It’s a lasting contribution to the horror genre, from one of its most unique artists.