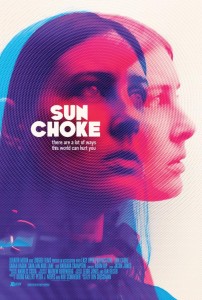 A blinding and impressive new poster has been unveiled for the psychological thriller Sun Choke, which follows a young woman called Janine as she recovers from a psychotic break. She undergoes a strange health regime that keeps her locked in the house, until her father deems her ready to enter the outside world. When she does, Janie becomes obsessed with a stranger and it becomes clear that her mind is still in a fragile state.

We reviewed and loved Sun Choke last year and described it as a “sterling example of a thought-provoking dissection of the psychosocial implications of well-intentioned but ultimately toxic protective care.” Check out the full review here.

If you like your films to be ambiguous, but beautifully shot and entirely gripping, then Sun Choke should be the film for you. You can check out the intense trailer below, which shows the film to be a sort of anti-fairytale. I wonder if Janie will get her happily ever after.

Sun Choke comes from director Ben Cresciman, stars Sarah Hagan and will be released on VOD and iTunes on 2nd August.