The Blair Witch Project May Head to Television 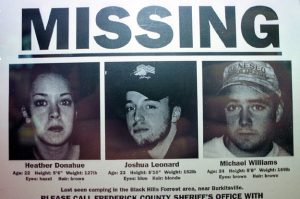 The long-awaited sequel to Blair Witch may not have scared up a huge amount of money at the box office, but The Blair Witch Project is far from dead. When speaking to the podcast Diminishing Returns, the director of the original 1999 film, Eduardo Sanchez, said that the film may head to the small screen.

“For us, it’s a very natural thing to go and say, ‘Hey, let’s do a frickin’ Blair Witch show. You can say it’s from the original creators and we can bring in a whole bunch of interesting directors to direct episodes.”

It definitely sounds like an intriguing idea, but what would the series be like? Hours and hours worth of teens being trapped in the woods with loud noises and a witch lurking may not appeal to the masses, especially if not many people flocked to Blair Witch last year. Eduardo Sanchez offered the following:

“I think that the idea of a Blair Witch anthology has always been very – just a really interesting thing. […] You know, and I think it might be one of those things that might be – you know – the more you think about it, you’re like, ‘That might be the perfect… a TV show.’ So, we’ll see what happens, but I think that’s the next big thing for Blair Witch. Probably TV.”

Emphasis on the word “probably” there, because none of this is confirmed. However, as a theatrical sequel is most likely off the cards, we think The Blair Witch Project could find a happy home on television, so keep your eyes peeled for more as it comes.