A new Blacula movie is currently in the works from MGM, Bron, and Hidden Empire Film Group—but the character will also be making his mark in the world of comics! Eisner Award-nominated graphic novel creator Rodney Barnes is working on a new Blacula graphic novel through his comic studio and publishing imprint Zombie Love Studios. 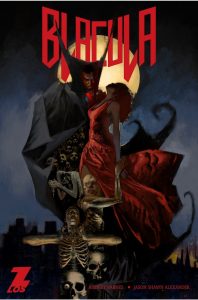 The project will see Barnes reteaming with illustrator Jason Shawn Alexander, with whom he previously worked on the comic series Killadelphia. The new tale will bring the iconic bloodsucker—widely considered to be one of the first on-screen depictions of a Black vampire—into the present day to face all the complications that come with it.

“I first saw Blacula as an 8-year-old at the Capital Theater in Annapolis, Maryland and it had a profound effect on me,” Barnes noted in the press release. “To bring the character to today’s sensibilities is truly an honour.”

The original Blacula movie, released in 1972, was directed by William Crain and starred William Marshall as the titular vampire. The graphic novel is slated for release in February 2022.