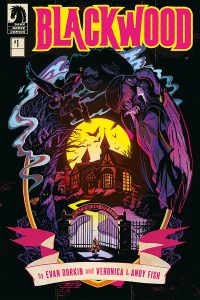 College is scary enough without having to throw in ghosts and Ghoulies! A trifecta of stress, expenses, and finals, most of us are burned out on college just thinking about it, but Blackwood College has something a little more special up its sleeves than the end-of-the-semester parties. Hitting shelves at the end of May, Blackwood delivers a world of magic and mayhem in the form of an occult school up to its neck spooky secrets. Though it treads lightly onto paths taken before, it’s comic timing and interesting characters raise the work up over its predecessors while making a unique mystery original to its world. Let’s just say it beats real college any day.

The comic focuses on a group of teenagers freshly arrived to Blackwood College. Unbeknownst to them, something evil has begun lurking the hallways of the academy, starting off with killing the dean and taking over his chair, though no one has quite yet noticed. The leader of the rag-tag group, Wren arrives with a chip on her shoulder, but can’t help noticing how strange both the town and the college Blackwood really is. Why are there so many graveyards? Why are the town folks so hostile? And what is this strange feeling she gets in room 109? Never-the-less, she decides to push these feelings aside to face her biggest challenge: getting along with the other students. When a shared dream forces the group for a night out, they quickly learn there is much more to Blackwood academy than meets the eye.

Blackwood #1 is a very fun comic. It’s like Harry Potter meets Gotham Academy meets Lovecraft with the heart of the work being a lesson about teamwork. The characters are all unique and come with their own personalities and burdens. From Wren with her pissed off attitude to the perpetually shy Dennis, they each exist fairly independent of each other and really feel like people you would meet in real life. While kids solving a spooky mystery isn’t original all on itself, it’s how the writer Evan Dorkin presents the story that really help it stand out. He’s aware that the real story is not in the kids, not really anyway, but the occult and dangers that lie with such power. He burns through the beginning set up rather quickly, lets the characters introduce themselves, and dives quickly into the world of Blackwood, a place that’s just as much of mystery to the characters as much as the reader. Granted, we have yet to see any classes or magic, but Dorkin does provide a tantalising view of the dangers already lurking ahead. With promo promises of ghosts, a two-headed mummy chimp, and even a plague of insects, Blackwood has enough material for several story arcs at least! Don’t be surprised if this one gets grabbed up into a big screen production. 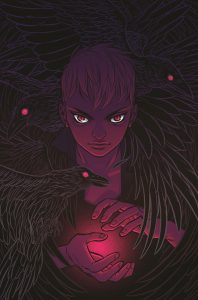 The art by Veronica Fish is fun and expressive without being over the top. Blackwood is aimed at a teen audience and the art reflects that sort-of YA cartoon style, similar to Archie Comics, which Fish has worked for. The characters all have their own look and the colour work and line work is simple, making the whole work relatively easy on the eyes. The monsters, on the other hand, do tend to get a bit gruesome and while Fish does stay away from gore, it does get pretty wild in some parts. Otherwise, this is a pretty safe read and fans of teen comics will absolutely dig this, especially for those with a bit of a darker nature.

Make sure to grab your copy May 30th!