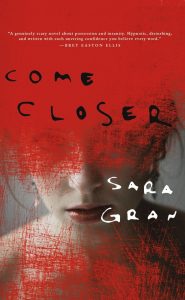 The novel, published in 2003, was praised by American Psycho author Bret Easton Ellis as “genuinely scary… hypnotic, disturbing.” It follows a young architect who may be demonically possessed, or simply going insane. Gran is set to pen the adaptation herself, with Academy Award nominee Michael London (Milk) serving as a producer.

Slade is no stranger to the psychological thriller. The British director’s first feature film, Hard Candy, starred Ellen Page as a teenage girl torturing a middle-aged man (Patrick Wilson) whom she suspects of being a paedophile. Slade went on to direct bloody vampire flick 30 Days of Night, and later helmed some of the most memorable episodes of Bryan Fuller’s Hannibal. Bandersnatch, his mind-bending feature-length Black Mirror movie, allowed Netflix users to decide the fate of its protagonist, leading them down various paths of obsession, madness, and mayhem.

Only time will tell what Slade will do with this creepy material, but if Come Closer is anything like his previous work, it’s sure to be beautifully shot.