I couldn’t wait to get my teeth into this one because of a couple of reasons. I loved the cover. It’s a horror. It has motorbikes in it. And of course it’s from Sinister Grin. Never heard of Jason Murphy before and that is probably because it looks like this is his first book.

How does it stand up as a debut then? 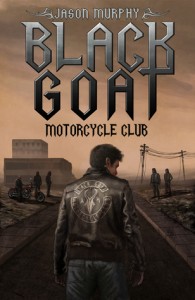 Synopsis:
Hank is a doctor. He doesn’t class himself as a top notch doctor. He works weekends in a godforsaken hospital in the middle of nowhere in Arizona. He hates it. He normally does his shift very drunk.

Whitey has woken up with a hangover. He remembers shooting a coyote in a trap outside his trailer and goes to get it. It wasn’t a coyote.

The weekend dayshift takes a turn for the worst for Hank when Whitey turns up with his find, a mysterious, fake FBI agent turns up with an equally mysterious crate and the Black Goat Motorcycle Club roll into town.

It’s two for one time.

Review One: Buy it. No excuses. Just buy it.

Review Two: My my. As debut books go, you ain’t gonna get much better than this. This was just absolutely superb. An early contender for book of the year!

Characters in this one are a bunch of people that are so well written you will feel like they are family. Every single one of them are so likeable (even the baddies), believable and just perfectly suited to this story. I know that sounds a bit stupid but if they had been in any other story they may not have fit so well. This story was just written for them. That sounds weird again doesn’t it?

Hank is a disgruntled, lazy, hard drinking doctor. He would admit that to you himself. He doesn’t have a lot of faith in himself or his abilities. Simone is the nurse that believes the hospital is hers and no one can do anything without running it by her. The stereotypical matron of old. Nathan is a young male nurse that loves his job and his family, he is working to make things better for them. Bullet is an EMT that is also rumoured to work in a strip club. Athletic, beautiful and mysterious. Every man’s dream. Whitey is an old man that has seen better days. He’s not as stupid as he lets on though. Put all of these together and you have the perfect make up of people inside the hospital that are the good side.

Castle is an agent. For whom nobody knows. He has messed up though. No one else knows the danger they are in because of this, apart from him and he won’t tell anyone. Gideon is the leader of the Black Goats. He is also mysterious and full of dark secrets and evil to the core. Varney is mystery personified. I can’t tell you any more about him. Put these together and you have the bad side.

The plot? A horror story of a group of people trapped in a hospital surrounded by evil on all sides, outside. They just don’t know that the evil is inside with them as well. It’s a battle for survival. A battle of good versus evil. A battle of evil versus evil. That is all your getting. It’s still more than I had before I picked it up, but I refuse to tell you anymore because you need to discover it for yourself.

So what’s it like then? Superb. Just bloody brilliant. The end!

That is really what I feel like writing. This book is just wonderful. It has more horror elements in it than some anthologies I’ve read. It mixes them all together and gives it a shake and produces something at the end that is just fantastic.

You ever see those big inflatable balls that you can climb inside and roll about in? After closing this book, I felt like I had climbed inside one of those and been pushed down the side of Everest!

We have a group of people trapped in a building reminiscent of Dawn of the Dead or Assault on Precinct 13. We have scenes reminiscent of that big battle in Cobra where there is just a nonstop assault on the building. We have heart-warming moments where you totally fall for the people trapped and hope and pray that they get out alive. We moments of pure anger and evil from the people outside the building where you both loath them and love them at the same time. They are fantastically evil and brutal in a way you just can’t help but admire.

The writing in this is brilliant. Smooth when it needs to be and brutal when it needs to be. This reads like it has been written by someone with a dozen books under their belt. The mixture of different types of horror works brilliantly. From the slasher, to the monster to the pure unadulterated psychological tension and horror inside the minds of people who have no idea what they are going to do to survive. Perfectly paced throughout, this is expertly put on paper to keep you totally glued to it and totally glued to your seat.

One other thing that got me about this is the fact that Mr Murphy is not afraid to take your main characters and make absolute minced meat out of them. I think he got his character writing training from the George RR Martin book of “Kill your characters when you want and not when people expect”.

To summarise: A horror story that will scare you and keep you on your toes and make your jaw hit the ground and just delight you.