“Interdimensional teleportation is murder on your stomach until you get used to it.” So says Charlotte (“Charlie”) Tristan Moore, the sassy protagonist of Black Goat Blues. The novel is a sequel to Red Right Hand, and author Levi Black returns Charlie to the realm of Lovecraftian gods and monsters. It is established in the first book that Lovecraft was Charlie’s great-great uncle, and his writings were supernatural visions of a cosmic otherworld. Because of her lineage, Charlie became the unwilling acolyte of Nyarlathotep, an Elder God also known as The Crawling Chaos and/or the Man in Black. Nyarlathotep is bested by Charlie in the debut narrative, but The Crawling Chaos still has significant leverage: Daniel, Charlie’s romantic interest, was put under the Man in Black’s psychic thrall, and is reduced to a debilitated state. In Black Goat Blues, the plucky heroine is hell bent on hunting down her bête noire.

Evaluating a follow-up in a book series is tricky. There are questions such as “Can the sequel be fairly critiqued as a standalone?” Or, “Is the sophomore effort superior or inferior to what premiered before it?” Black Goat Blues retains many of the positives that Levi Black exhibited in Red Right Hand: solid writing, an immensely engaging lead character, crackling dialogue, and relationship complexities. 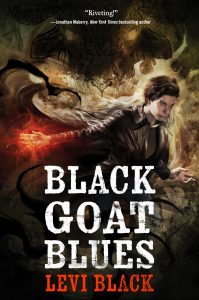 To truly appreciate the second book in the series, it certainly helps to have read the first novel. A fluidity between storylines is thus established. There’s a certain assumption of familiarity with the earlier plot when one reads Black Goat Blues, and the smattering of references to events from Red Right Hand will be less satisfactory to a reader who picks up the sequel without having read its predecessor.

That said, the bulk of the narrative is a delightful escapade into the urban fantasy sub-genre. In addition to the Lovecraftian universe, there’s a segue into another staple of classic weird fiction, The King in Yellow short stories by Robert W. Chambers. While such hat tips to the masters of the genre are fun in a wink-wink sort of way, what grounds the tale is attention to very real emotions and reactions. Author Levi is a shrewd assessor of reactions to fear, as is evident in this passage: “Panic is an animal state, the wild mewling of a newborn mammal with its fur still slick to its body and just enough foresight to know that it is nothing more and nothing less than meat for the eating.”

Black Goat Blues, published by Tor Books, will be released in the UK on 13 December. American readers can pick it up now.