Canadian indie horror machine Black Fawn Films recently renewed their partnership with Breakthrough Entertainment; a remarkably successful relationship that has yielded eight films including Bite, Let Her Out and the upcoming The Heretics. Their latest venture will see them moving into the world of television with supernatural crime series The Cleaners. 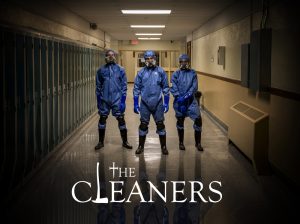 With the support of Canadian film equipment company William F. White Int’l, Black Fawn’s Chad Archibald and Cody Calahan will be taking their pitch to Networks at the Banff World Media Festival, taking place from June 11th – 13th. Created by Calahan and Al Kratina, The Cleaners follows a crime scene cleaner who mops up the messes left by supernatural killings, all the while hiding the truth from the world. The truth that monsters do exist.

Redlab Digital and Panavision will support the project alongside William F White Int’l. and Breakthrough. In the press release Calahan – who directed Let Her Out – says, “We’ve been developing this idea for a while, and with the support of these companies we’ll be pitching networks and buyers who we wouldn’t normally have access to. Expanding into the television realm has been a goal for us, and our entire team couldn’t be more excited about this new venture.”

William F. White Chairman/CEO Paul Bronfman adds: “We’re more than just an equipment supplier here at Whites. It’s all about creating and nurturing relationships with emerging filmmakers, and Black Fawn Films is no exception. They have our full support as they pitch their new series at Banff!”

Expect plenty more on this and other projects from the Black Fawn camp soon.