As promised after our recent chat with Jack Brooks: Monster Slayer scribe John Ainslie, SCREAM are overexcited to be able to show you the official poster for Black Fawn Films’ latest genre venture, The Sublet.

Helmed and penned by Ainslie and starring Tianna Nori, (The Demolisher, Save Yourself), Mark Matechuk, Krista Madison (The Dirties, Operation Avalanche) and Rachel Sellan (Silent Hill: Revelation 3D) The Sublet is a foreboding psychological-thriller which focuses on new mother Joanna (Nori) who is consumed by postpartum depression as she moves into an unusual sublet apartment with her husband. As her partner puts his career before his loved ones Joanna’s solitary confinement leads her to discover a violent past in her new abode. Clutching at any last straws to maintain her sanity, the apartment’s blood-soaked past seeps into the present culminating in an excruciating climax.

The film’s European premiere will take place at this year’s Razor Reel Film Festival on November 7th and will be swiftly followed up by the North American premiere at Whistler Film Festival this December. Watch this space for an impending interview with John Ainslie and the film’s leading lady Tianna Nori, but for now we’ll leave you with the aforementioned official poster: 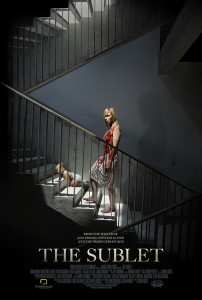 You can also read our recent interview with John Ainslie in relation to the impending revival screening of Jack Brooks: Monster Slayer here