Synopsis:
A group of teenage friends head up to a cabin in the woods, where they…oh FFS, you know what happens next, right?

Actually, one of the many problems with BLACK CREEK is that it takes nearly an hour of this 80-minute movie for its central protagonists to be directly threatened. Which is not so much a problem because nothing (allegedly) scary happens up until then, but because you really want to see this assortment of young dolts get theirs.

It’s an especially hapless bunch in an especially hapless movie, one that employs the successive-possession gambit used much more effectively in Mike Mendez’s DON’T KILL IT: One human host after another is overtaken, their eyes go black and they kill one or two people before the malignance hops to someone else. The explanation for this supernatural state of affairs has something to do with “Wisconsin skinwalkers,” the “Jimmy Winter murders,” a girl who was buried alive and a recently deceased hunter, whose son Mike (Chris O’Flyng) and his sister Heather (Brianna Shae) travel to that isolated house to scatter his ashes in the surrounding woods. They bring along a small group of friends, of whom the dumbest of the dumb is Rachel (Rachel Vedder), who looks at an arrow sticking out of their tire and says, “We ran over a stick.” 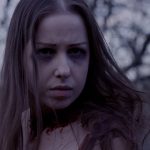 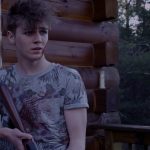 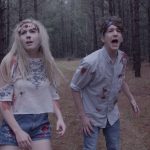 Lines like that and the movie’s overall embracing of low-budget horror clichés almost, but not quite, suggest that a takeoff on the genre was intended. Unfortunately, everyone from writer/director James Crow to his cast play it all straight, and not very well. The first onscreen victim can’t even plead for help convincingly, and the troupe of potential victims intone their lines as if they’ve just read them for the first time. The clickbait among the cast is O’Flyng, an on-line star with over 1.1 million followers for his YouTube channel, where he presumably evinces more charisma and humour than he conveys here. There’s no enthusiasm behind his performance in BLACK CREEK, though it must be said that it would take a Shakespearean thespian to rouse interest in a role with so little personality. Meanwhile, as if to compensate, Kelly and Lance Wendlandt overact their exposition as a couple of locals with ties to the bad stuff that went down in decades past.

There’s also a sheriff (Pierse Stevens) who says things like, “Nothing out here but city kids looking for a highway to sex,” which at least alleviate the tedium of the otherwise flat, functional dialogue. (“Did you hear that? I heard a scream!” someone says for the 348th time in this type of film.) Other than a secondary victim (Kaylee Williams) who spends most of her screen time bound and gagged, no one ever looks as frightened as they should be under the circumstances; even the discovery of a pile of freshly severed animal heads only mildly perturbs our heroes and heroines. But then, there’s not much here to frighten the viewer either—just some halfhearted (and uncredited) makeup effects and blood-splattering-on-the-wall mayhem—and little to titillate other kinds of thrill-seekers, as those characters who have sex do so with their shorts and underwear on.

Bereft of pacing or visual interest, with a synthesiser score that apes everything from HALLOWEEN to STRANGER THINGS and a resolution that makes no sense, BLACK CREEK is the kind of low-ambition but easy-to-sell horror flick that’s been glutting the marketplace and making it increasingly challenging for more original independent fare. Speaking as a journalist, it’s dismaying that Freestyle Digital Media didn’t give nearly the outreach to Simon Rumley’s recent, arrestingly eccentric FASHIONISTA that it did to this tedious, utterly generic product.