I’d really enjoyed the previous book I’d read from Toby Tate, Lilith, so I was excited to pick up his latest offering, a novella entitled The Black Church. The fantastically dark book cover further piqued my interest. I love it! I haven’t been overly impressed with some of the DarkFuse covers but Tate has had brilliant ones for both of his.

The story begins with Anton Ivanov desperately trying to destroy an ancient prayer rug that was passed on to him following the tragic death of his sister. In trying to set fire to it, he himself if burned to death but the rug survives. Following the death of Anton, his son Daniel inherits the unique prayer rug. Shortly after the rug comes into his possession, Daniel begins to dream of a church in Transylvania and the death of a boy there during the church’s construction. In his waking life, Daniel sees faces of loved ones appear mysteriously in the rug, shifting from the intricate woven pattern, and shortly after a face appears, the person dies. 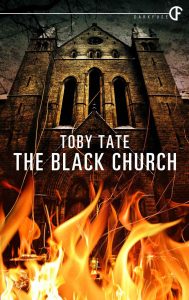 Daniel learns more about the prayer rug and its history, eager to discover its secrets. The back story of the curse of the rug is captivating, partly told through Daniel’s dreams and partly through people he speaks to who lived in the Transylvanian town, Brasov, where the Black Church stands. Revenge, demonic forces, fire, and ancestral curses are key themes. Premonition plays a big part, both with the rug marking who will die next and the premonition of former Brasov native Serghei who helps Daniel. There is something very frightening about the thought of imminent death being fated, predetermined, and the helplessness of being unable to stop it. It is that innate fear that has led to movies like the Final Destination series to be so popular. Being forced to face your own or others mortality in such a way is a very primal human fear.

With this being a novella, there is not much room for detailed character development, it’s straight into the action and it’s very fast paced. This is a really enjoyable tale, it’s a lightning quick read and you’ll be through it in one or two sittings.  As is usually the case with a short tale like this I’m left wanting and hoping for more. Highly recommended.