THE BIRD WITH THE CRYSTAL PLUMAGE: Film Review 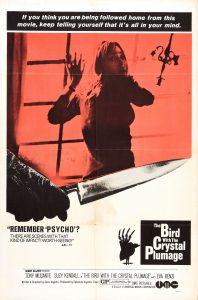 Discussing films by the Italian master of shock Dario Argento, is always going to be difficult. Considered by many horror fans as a genius, criticising his work in any way has become something akin to blasphemy. Truth be told however, despite the occasional exception – like his masterpiece Suspiria (1977) – many of his films are in-fact merely mundane mystery thrillers, intermittently spiced with gruesome set-piece murders. A prime example of this is his 1970 directorial debut, The Bird with the Crystal Plumage, newly released by Arrow Video on Blu-ray and DVD. Despite being beautifully shot and accompanied by a marvellously evocative score by Ennio Morricone, as well as featuring many of the trademarks to which Argento has returned throughout his career, here is a film which is, on reflection, quite tame.

American writer Sam Dalmas (Tony Musante) is in Italy, having just completed a book assignment. On the way home to his apartment one night he is witness to an attempted murder in the entrance of an exclusive art gallery. Unfortunately the murderer sees Sam, and is now determined to silence him at all costs.

What Argento is probably most closely associated with in the eyes of the general public are his elaborate, set piece killings, which are unfortunately lacking here. Despite flashes of genius, the deaths of The Bird with the Crystal Plumage, are somewhat subdued affairs: the opening ‘murder’ – which in true Argento style is not all that it initially appears – is wonderfully elaborate, involving several bizarre statues and a multi-pane sliding glass door in the foyer of an art gallery. After this however, it’s largely downhill from there on – apart from an effective segment towards the end where Sam’s girlfriend Julia (Suzy Kendall) barricades herself into his apartment to escape the killer, reminiscent of one of the best shock sequences from the director’s later film Opera (1987).

Another thing which became a regular feature of Argento’s work, and which he uses here for the first time, is to feature high profile British or American names in prominent parts. Whilst stars like David Hemmings, Jennifer Connelly and Julian Sands have regularly appeared in his films over the years, here it’s the turn of stunning English actress Suzy Kendall, who was at the height of her fame when she worked with Argento. The damsel in distress persona – which she went on to hone to great effect in shockers like Torso (1973) and Craze (1974) – is given airing in several of the film’s better parts, proving her to be one of its main highlights. 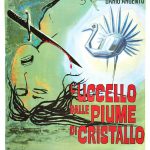 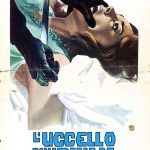 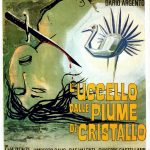 When it boils down to it The Bird with the Crystal Plumage feels like a dry run for themes and visuals which Argento returned to and expanded upon in the future. If watched as such you will probably enjoy the film much better than going into it expecting an elaborate essay in the Grand Guignol, similar to those for which the director is now best known.