Billy Returns in the Japanese Poster for Jigsaw 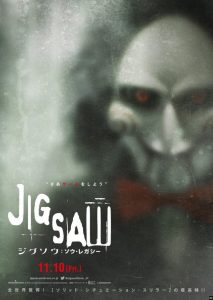 A brand new Japanese poster for Jigsaw has been shared online and it puts the puppet Billy front and centre. It’s been 13 years since Billy first appeared on our screens, but this new poster shows that he is no less scary than he was back in 2004.

Synopsis:
Bodies are turning up around the city, each having met a uniquely gruesome demise. As the investigation proceeds, evidence points to one man: John Kramer. But how can this be? The man known as Jigsaw has been dead for over a decade.

Saw will take back its rightful spot in the Halloween slot this year when Jigsaw lands on 27th October. Remind yourself of what’s to come with the official trailer below, which teases brand new and sinister traps as well as new victims and police officers on this (copycat) killer’s case.