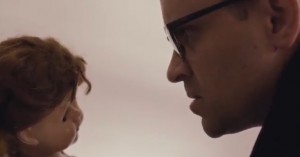 Not all horror films revolve around teenage characters, and a more grown-up approach requires the tackling of grown-up fears. And there is surely no bigger nightmare for parents in particular than the death of a child, a subject explored in Don’t Look Now, Lars von Trier’s Antichrist and now, The Terrible Two, an upcoming vision of horror and misery from director Billy Lewis.

Lewis (2009’s horror mystery Jailhouse) is currently in post-production with the film, which had a budget of just over $20,000, and should hit screens later this year. This intriguing low-budget spooker deals with faith, the paranormal and the grieving process. The Synopsis is as follows:

Albert and Rose Poe are approaching the one year anniversary of deaths of their two daughters. Rose continues to struggle to come to grips with the loss of her girls. Albert not so much. As the anniversary comes and goes things begin to get darker and darker in the Poe house……a house that once was filled with so much joy and hope. Rose discovers an old manuscript in the attic that reveals things about the previous owner of the house that wasn’t revealed to the Poe’s when they purchased the house. Addi and Jade never wanted to die that day so that begs to answer the question, ‘Where do little girls go when they die?’

Check out the trailer for The Terrible Two below.