American Horror Story is gearing up for its seventh season, which is set to have a theme surrounding the 2016 US election. This will take the horror series to its most modern story to date, but it is not said to feature literal characterisations of Donald Trump or Hilary Clinton. Instead, the show will use the Presidential race as a platform for the season to kick-off of. 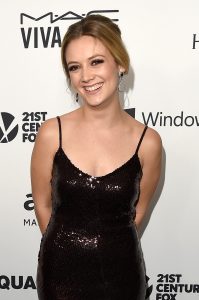 Scream Queens’ Billie Lourd (pictured right) has now been cast in a leading role in the upcoming season, but just as the season’s story itself is being kept under-wraps, there are no specific details about who her character will be.

Lourd joins Sarah Paulson and Evan Peters, who are both returning to the new season of AHS.

When speaking about the new season, Ryan Murphy told E!:
“I think people literally think Sarah Paulson is playing Hillary Clinton and I wanted to clarify that that is not true. Horror Story is always about allegory, so the election is allegory. It’s our jumping off point. It is about the election we just went through and what happened on that night and the fallout of that night, which to many people, from all sides of the camps is a horror story. And you know, that show is always so fun when it’s about the zeitgeist and what we’re doing now.”

As always, American Horror Story should be returning this autumn.