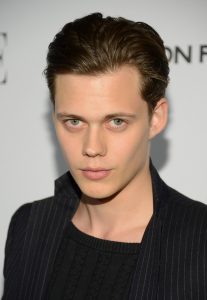 Bill Skarsgard has joined the cast of the Stephen King-inspired series Castle Rock, which is set to air its 10 episodes on Hulu. The series will intertwine the worlds and stories of King, featuring characters from It, Dolores Claiborne, Needful Things, The Green Mile and plenty more.

It’s interesting to see Bill Skarsgard join the cast, because he’s also set to star in the upcoming adaptation of It as the iconic and chilling character of Pennywise. However, he will not be playing this role in Castle Rock and will, instead, a man with an unusual leg problem. Maybe his leg is weighed down by those heavy clown shoes…

The series comes from Bad Robot Productions and executive producer J. J. Abrams. Check out the previously released teaser for the show below, which gives you an insight into Castle Rock’s inspirations.

Writers Sam Shaw and Dustin Thomason have the daunting task of weaving King’s many worlds into one, and production is set to begin this summer. The cast includes Sissy Spacek, André Holland, Jane Levy and Melanie Lynskey.