Bill Moseley is a Rhyming, Cannibalistic Clown in Crepitus Trailer

While the craze of wandering around the streets at night dressed as clowns seems to have fizzled out, the wave of films arriving in its wake shows no signs of slowing. One of the more enticing is Crepitus, which stars none other than Bill Moseley as its titular jokester and has this seriously, seriously nasty trailer. 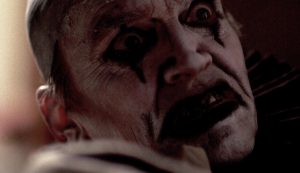 Seventeen-year-old Elizabeth and her younger brother, Julian, are thrust into circumstances more terrifying than life with their abusive, drunken mother when they are forced to move into their deceased grandfather’s house. Frightened beyond belief, they are forced to learn horrible things about their family history. Never mind the ghosts in the house; there is something far worse that takes an interest in them… a cannibalistic clown named Crepitus.

Crepitus is still gathering funds over at Indiegogo, with a scheduled US release date of October 15th.