Kane Hodder and Bill Moseley must stop meeting like this. Starring together in no less than five films currently in production, the hard-working horror idols have still another on the way, entitled Wild Game. 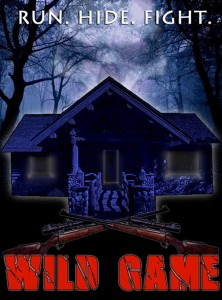 Directed by Staci Layne, the film takes a group of friends on a wilderness survival course that becomes far more serious than they were led to expect. Hodder and Moseley are joined in the cast by X-Men/Twilight actor Daniel Cudmore, American Mary’s Tristan Risk and C. Ernst Harth (Thir13en Ghosts, Trick ‘r Treat).

Synopsis:
Four friends pay for a weekend out on a faux survivalist course. Though no gadgets are allowed, one of the friends sneaks a video camera on the trip into the wilderness. What she records and what they experience is the frightening reality that their opponents on this survival course are playing to the death.