Bill Moseley Gets Creepy in the Trailer for Crepitus

Bill Moseley is the best thing about this new trailer for Crepitus, because he’s Bill Moseley and because everything else looks a bit weird. Don’t get me wrong, I love a bit of weird in my horror, but there’s some too odd about this one.

Check out the trailer for Crepitus below, it follows a couple of young teens as they are forced to fight for survival against a cannibalistic clown called Crepitus. Moseley shines, but everything else looks a bit flat and uninspiring. 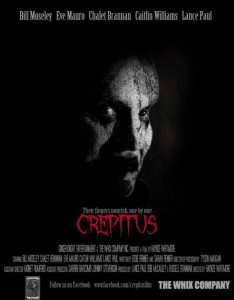 Synopsis:
“Seventeen year old Elizabeth and her younger sister Sam are thrust into circumstances more terrifying than life with their abusive, drunken mother when they are forced to move into their deceased Grandfather’s house. Frightened beyond belief, they are forced to learn horrible things about their family history. Never mind the ghosts in the house, there is something far worse that takes an interest in them … a cannibalistic clown named Crepitus.”