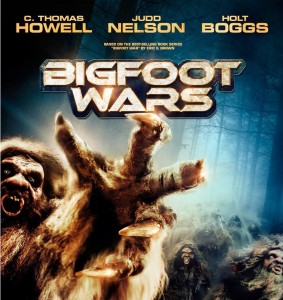 Synopsis:
The small town of Boggy Creek is fully aware of the multitude of Sasquatch that roam the nearby woods. A fragile amnesty is in place for them to keep hidden in the undergrowth, but now, the need to propagate their species has become too powerful and they need women! Indeed, since an old curse was placed upon them they’ve been unable to bear a female of their species, but time has led to a distortion of nature and now the local townsfolk find themselves in grave danger. When a tweet from an actor in a film (in this case C.Thomas Howell) pleads with you NOT to buy their forthcoming movie, it doesn’t take a genius to work out that something is indeed rotten in the state of Denmark. Based on the acclaimed and bestselling series of books by author Eric S. Brown, this adaptation came flat-packed with a readily assembled narrative but somewhere, somehow, things went very wrong indeed.

From its woeful post-coital opening scene that displays a quite horrifying sound mix, you’re left under no illusion that the ensuing 71 minutes is going to be nasty. First up is the task of enduring a car full of college students whose personalities and backstory could be written on the back of a beer mat. They’re heading into Boggy Creek to enjoy some downtime, but even before they set up their volleyball net and engage in some woodland bound sexual exploits, their fate is hinted at with the subtlety of one of their swimsuits. Holt Boggs as Sheriff Jim Taylor is charged with holding Bigfoot Wars together as he investigates the slaying of this group of kids. The Texas drawl of his narration could have been a worthy addition, but here it comes across as stilted and poorly written.

With the names of C. Thomas Howell and Judd Nelson above the title, you may be forgiven that such mid-80s icons may feature prominently in such a picture, but alas they’re left to mere cameos as Howell turns up (after 40 minutes) as trailer trash redneck Zeke, while Nelson features as a self-prescribing doctor who suspects these attacks may be caused by something other than a bear. Bigfoot Wars gave me flashbacks of watching these two in the last movie they paired up in – the Asylum schlock-fest The Day the Earth Stopped (2008), and at the time I let myself rest easy in the knowledge that they’d hit rock bottom, and at least they couldn’t sink any lower in DTV Hell. This awfulness however makes that Mockbuster look like it was directed by Robert Wise.

Director Brian T. Jaynes has a lengthy CV of direct to video low budget fare, and in his hands you’d think that at least you’d reach a sustainable level of mediocrity. The one feature of his that reached UK shores was the relatively passable Humans vs. Zombies (2011), so to discover his latest to be of such poor quality is of great frustration. Fingers can be pointed in the direction of budget and shooting schedule, but the lack of quality in such basic elements as sound, continuity and make-up mean that Bigfoot Wars rarely rises above something you’d go into the local woods to shoot with your mates back when you were a kid.

One out of 5 stars

Win A Copy Of THE FEAR On DVD

A WALK AMONGST THE TOMBS: FILM REVIEW